On a day road trip, starting at the Old City, we will take you to places where you will experience Dubrovnik in all its beaty and uniqueness. Built in 2002, the Dr.Franjo Tuđman bridge, named after Croatia’s first president, is an architectural attraction. Located on the western entrance of Dubrovnik, the bridge is 294 metres long, and is in harmony with Gruž harbour, Lapad peninsula and the many islands strung around Dubrovnik like so many pearls. From the belvedere of the bridge, it is one of the most beautiful sights in the Dubrovnik area. From the bridge we take the road to the spring of the Ombla river, a river that means life for the city.

According to some researches, the Ombla river was formed out of the spring and is considered to be the shortest river in the world.Since the time of the Dubrovnik Republic, the Ombla has been the main water supply for the city. During the 15th century the famous builder, Paskoje Miličević built a dam and several mills, where even today one can still fell the real and magnificent power of the rushing water. Our next location – SRĐ hill above the city, vibrates with exciting expectations and offers one of the most fascinating views of Dubrovnik. From this view one can see why Dubrovnik is often honored as one of the most beautiful cities in the world. A city made of stone, surrounded by a white fortification system emergout of the blue Adriatic Sea, the green oasis of nearby Lokrum island, and outlines of Cavtat in the distance …

That’s the view that clarifies the thoughts and words of the great Bernard Shaw – “If you want to feal as if you are in paradise, come and see Dubrovnik”. From the hills of SRĐ the road takes us to the Croatian Tuscany, the region of Konavle and its centre Cavtat. Konavle manages to keep the beauty of its pristine nature while still developing and branching out as a tourist attraction. Together with many hotels located in Cavtat, Konavle has been expanding in the area of rural tourism the past several years, so that one should not be surprised to see luxurious villas with pools in a rich horticultural environment. Visitors are often overwhelmed by the Mediterranian effect which the small and charming seaside town of Cavtat creates. Right there on seaside is where everything happens during summertime in Cavtat.

Beside the refreshing stroll down the seaside, one can literally feed its soul with culture when visiting the mausoleum created by the famous sculptor, Ivan Meštrović, or visiting the birthplace of the great Cavtat painter Vlaho Bukovac, these are just some of the pieces of inevitable urban history of Cavtat. 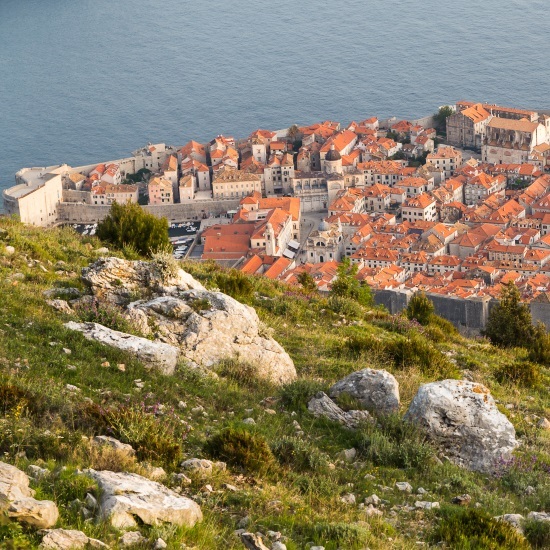 Gruž harbour, Lapad peninsula and the many islands
3